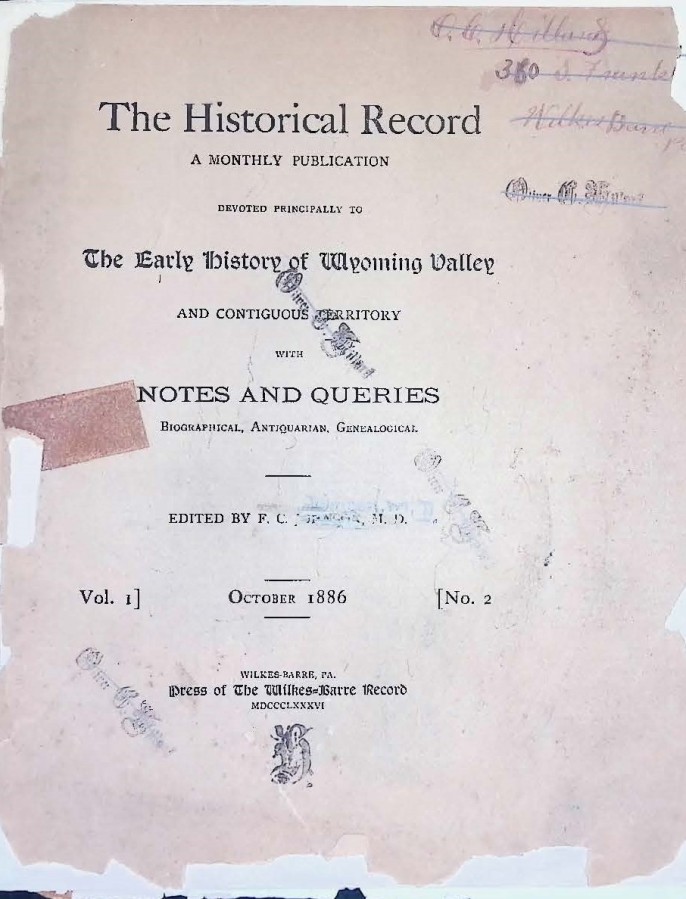 Wilkes University Archives is excited to announce that thanks to Bridget Hannon, a Junior History Major with a concentration in Public History and minors in English and Women and Gender studies, the Publications Series, 1785-1982, of the Gilbert Stuart McClintock special collection, is now processed and digitized. Bridget currently works a part time job at a restaurant but is very interested in pursuing a career in archives. Her interests are in 19th century labor history in America.

The link to the finding aid to the series can be found here on our Archivesspace catalog. Below are Bridget’s reflections on the series.

The Publications series consists of historical publications ranging from 1785 to 1982. Much of the collection is arbitrary, however, the majority of the items in the collection seem to consist of magazine publications and bulletins from local history societies.  Northeastern Pennsylvania was the home of many societies where members studied the region’s history.

Through the late 19th and into the 20th century there have been several academic magazines and journals published in the Northeastern Pennsylvania region that focus on the history of the Wyoming Valley. The “Historical Record” is an example of these publications. There are five issues found within this collection. In each issue the history of the valley is discussed and obituaries of prominent citizens are listed. One example is Col. Sturdevant of Wilkes-Barre. Sturdevant served in the Civil War and was a respected businessman. The Historical Record gives a biography of his life and includes an illustration of him.

This collection contains two publications on the 19th century artist George Catlin. George Catlin was born in Wilkes-Barre, Pennsylvania in 1796, however, during his lifetime he lived in various parts of Pennsylvania. He found his passion for painting Native Americans in Philadelphia in 1827. After that Catlin traveled across the Americas painting scenes and people from native tribes from 1830 to 1836.  He would travel the United States and Europe with his gallery until his death in 1872. One booklet in this collection is “Indian Loving Catlin” from 1956. This gives a biography on Catlin, which was used for a showing off his work at Wilkes University. The second publication on George Catlin is “George Catlin Collection of Indian Paintings.” This is a booklet containing information about his paintings and where they were located at the time of publication.

Within this collection there is a copy of the 1895 publication of “The Purple Cow” by Gelett Burgess, a booklet that contains a collection of children’s stories and poems. Burgess was a children’s author who gained popularity in the late 1800s. His most successful poem, the “Purple Cow,” was so frequently quoted that he said he regretted writing it. Burgess is also given credit in coining the term “blurb” as in a short summary. He also was the founder and president in what would become the Boys and Girls Club of San Francisco. The Purple Cow contains short poems with illustrations to go with it. There are seven short poems, and one longer poem at the end. This publication has remained popular as there are several restaurants in Northeast Pennsylvania named after “the Purple Cow.”

This collection also contains publications on the French colony of Azilum along the banks of Susquehanna. One publication, titled, the “Booklet of the History of Azilum: French Refugee Village on the Susquehanna,” describes how French refugees fled France and Haiti for safety from political uprisings and moved to Azilum to escape the French Revolution and Haitian slave uprisings. The majority of these refugees were nobility. Murray discusses some of the notable landmarks of Azilum and how the French colonists lived there. Apparently many of them believed Marie Antoinette would live at Azilum after she fled France, so they built her a house that is the focal part of the historical site. The artistic rendition of the house is by a local artist, Elizabeth Laporte, but the sketch is not included in the publication. Notable people of Azilum include Vicomte de Noailles and Antoine Omar Talon, who were founders of the settlement. Later settlers of the town include Aristide Aubert du Petit-Thouars, a French sea captain, who cleared land for his sisters to live. In a series of bulletins from the Tioga Point Museum, artifacts from this colony are photographed.

Another book featured in this collection is “American Wildflowers” by Emma C. Embury and illustrated by Edwin Winfield. The publication includes information about the flowers and their illustrations, as well as writings and poems about them. They include lines of poems from British poet Walt Whitman, and American poet Emily Dickinson. There is also a short Native American poem on how wildflowers began to grow, but a name is not mentioned.

One of the more interesting publications in this collection concerns its donor, Gilbert Stuart McClintock.  The 1950 issue of the National Geographic titled, “Down the Susquehanna by Canoe,” was researched by McClintock. The authors of the article, Walter M. Edwards and Ralph Gray, wrote a letter thanking McClintock for the research he provided for their article. This letter is included in the collection with the full article.  The article is about Gray and Edwards canoeing down the Susquehanna and records sociological and historical information of the region. Their journey started at the Goodyear Dam near Oneonta, New York and ended in Port Deposit, Maryland. They included photographs of places that they had passed through including Wilkes-Barre, Azilum, and Harrisburg. They described the landscape, history, and the local people.

Although it is difficult to determine the collecting decisions of Gilbert Stuart McClintock, it is easy to guess that he collected these publications in order to document Wyoming Valley history and significant people that contributed to its prestige. Researchers going through this collection will be able to trace historical changes in the region from colonial Pennsylvania all the way through the 20th century. From historical bulletins, to published speeches commemorating historic battles, to children’s stories that have influenced restaurants and businesses to this day, the Publications series has a lot to offer for those studying Northeastern Pennsylvanian history.

One thought on “The Wyoming Valley in print: Processing the Publications series, 1785-1982, of the Gilbert Stuart McClintock collection”