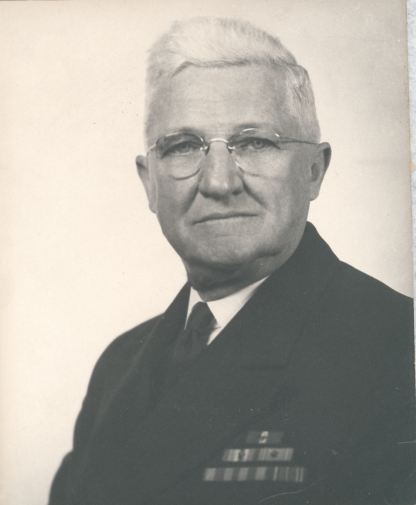 Wilkes University Archives has a guest blog post written by Nick Chupela, a Senior History major with a Political Science minor. One day, Nick would like to work in academia as a professor. After graduating, he plans on moving out west to get a master’s degree in Medieval Studies and eventually a Ph.D. In Fall 2021, Nick processed the Hugo V. Mailey papers and in Spring 2021, he processed the Harold R. Stark Collection. This collection, ranging from 1923-1972, consists of various papers, photographs and physical objects that document Admiral Stark’s time in both the United States Navy and at Wilkes College. Some of the most notable pieces found within this collection are letters exchanged between Admiral Stark and significant historical figures, an ivory cane from 1757 that belongs to his famous ancestor General John Stark, and items that reflect upon his military achievements such as awards he earned and photographs of important individuals from his time serving in World War II. The finding aid and digitized items can be located here. With the exception of the first subseries, the entire collection is digitized. Below are Nick’s reflections.

Harold Rainsford Stark’s name is well-known in the Wilkes-Barre area for his involvement with Wilkes University and through his extensive military service, contributing both his time and efforts into serving every aspect of the United States from the local to the national level. He was born on November 12th, 1880 in Wilkes-Barre, Pennsylvania. As a young man, he left to join the United States Naval Academy in 1899. While he was a plebe in the Naval Academy he was given the nickname “Betty” in reference to Elizabeth Page Stark, the wife of Revolutionary War General John Stark, who was being commemorated at the time. He graduated from the academy in 1903, and spent the next twenty five years performing various tasks for the Navy.

During the late 1920s and into the mid 1930s, he served in Washington D.C. as the Naval Aide to the Secretary of the Navy. His military career from there led him to become Chief of the Bureau of Ordinance from 1934 to 1937, where he spent his time organizing and structuring the Navy. He also had shown his natural ability of being a successful diplomat, and this particular skill became a highlight of his naval career. In 1939, President Franklin D. Roosevelt promoted him to Chief Naval Operations at the onset of World War II.

As Chief of Naval Operations Admiral Stark oversaw the expansion of the United States Navy as the threat of the Axis Powers grew throughout Europe. Through his proposed “Two-Ocean Navy Bill” that was granted by Congress on July 19th,1940, the policy allowed for a 70% increase in navy forces with the ability to relocate 30% of the funding as needed by himself and the President. He would later take over as the commander of the U.S. forces in Europe, and step down from his position as Chief of Naval Operations in March 1942 following a controversial miscommunication that some historians believe led to the Attack on Pearl Harbor on December 7, 1941. Some historians believe Stark is to blame over the failure to provide sufficient information of the imminent attack on Pearl Harbor, and changing the wording of Admiral Richmond K. Turner’s warning over a possible attack to less threatening sounding language. Other historians argue that the blame fell directly on the Director of War Plans, Admiral Richmond K. Turner. Turner’s blame is thought to have originated from the failure to send this imminent threat to Admiral Husband E. Kimmel, The Commander of the U.S. Pacific Fleet stationed in Hawaii, and provide sufficient time to prepare for a surprise attack.

While Harold Stark’s career is recognized through his service in the Navy, he was also involved as a Board of Trustees member of Wilkes College in Wilkes-Barre, his hometown, and  eventually became Chairman of the Board in 1959. One of Stark’s major contributions to Bucknell University Junior College, which later became Wilkes College, was the donation of a house he inherited from his sister Ellen Chase and her husband Fred Chase on South River Street. Not knowing what to do with the property and not looking to make money off of it he decided to donate it to BUJC, where it became Chase Hall on February 1, 1937. Stark eventually became a member of the Board of Trustees, and helped Eugene S. Farley and other members with various tasks and projects to improve the campus.

Of these projects, the one that is most attributed to his legacy is the building that was named after him. Stark used his influence to fundraise a million dollars to finance the construction of Stark Hall, now Stark Learning Center, and he was able to help the campus acquire the property from the Dupont Company by calling up an old childhood friend who worked there. Admiral Stark’s phone call to the Dupont Company led to the purchase of the property for Wilkes College, and the construction of the new building in 1957. He reflected on his impact at Wilkes in an interview from 1967, and what he thought his contribution meant to the campus. Stark said “I was grateful that I could do something- I never thought of it until it was mentioned and I was asked, but I was grateful for the opportunity (again it comes back to Gene Farley after I got to know him, but not too well, it was in the early days) but grateful that I had the opportunity because I enjoyed the people he had selected.” See below a snippet of the oral history transcript. The humble attitude he demonstrated in his interview was one of the many characteristics that not only showed his abilities to be an effective leader, but showed the kind of person he was when it came to helping others and being a part of a force for change.

Harold Stark is not only connected to General John Stark and his wife Elizabeth Page through the nickname “Betty,” his connection with them is through distant family relations and the ownership of an heirloom that once belonged to John Stark. This collection contains an ivory cane from 1757 that once belonged to the early American General John Stark, and the markings and engravings on it show us how and why he came into possession of it centuries ago. John Stark was born in the Province of New Hampshire in 1728, and was initially an Officer in the British Army before later becoming a Major General in the Continental Army in the American Revolution. His cane is crafted from dense ivory and has a rounded top, with an inscribed metal band underneath the rounded top that says “Presented to Gen. John Stark for his Defence of Fort William Henry, March 17th 1757.”

During this time he was fighting as part of the British Army in the French and Indian War as a Second Lieutenant under Major Robert Roger’s company of soldiers called “Rogers’ Rangers.” They were formed by Roger at Fort William Henry in 1755 and stationed there until the fort had been attacked and destroyed by the French and their Native American allies in August of  1757. It is interesting to note the rank on the cane being that of a General while also bearing in mind the date on the cane would have been around the time he was a Second Lieutenant, perhaps being gifted to him years later after the French and Indian War while he was in the Continental Army. Nevertheless, this cane has stood the test of time and been passed down through the generations until it fell into Harold Stark’s possession.  The cane’s legacy shows us that the Stark name has been involved in important military conflicts since before the founding of the United States, and that Harold Stark, like his ancestor John Stark, served his country in a war that shaped the world into what it is today.

During his lifetime Admiral Stark had come into contact with many notable people due to his military career. Within this collection, various letters and pictures are addressed to Stark and they range from former Allied servicemen to influential world leaders. Of these documents, some of the more intriguing are his correspondence with Winston Churchill, the famous former Prime Minister of the United Kingdom during World War II. Once Admiral Stark was reassigned as the Commander of the U.S. Forces in Europe in April 1942, his headquarters were located in London. From there he spent the remainder of World War II aiding in important battles such as overseeing the invasion of Normandy in June 1944, as well as maintaining important diplomatic ties to allied European powers. He was particularly successful at maintaining a great rapport with the British, building good relations amongst figureheads in the Royal Navy, citizenry, and government leaders. This can be seen firsthand with the documents found within this collection from Winston Churchill, and they show us the respect and admiration that he had on a personal and professional level for Admiral Stark.

On November 12th 1942, a few months after Stark had arrived in London, a picture of Churchill standing by a table and chair was given to Stark signed “To Admiral Stark from Winston Churchill 12 November 1942.” This gesture of sending an autographed photo of oneself can be found in other pictures in this collection, such as Queen Elizabeth II, Charles de Gaulle, and Franklin D. Roosevelt.

Churchill’s level of communication, however, goes beyond sending an autographed photo. His admiration for the admiral is shown in a typed letter regarding the creation of Stark Hall in 1957. In this letter from September, 1957, Churchill says “it is most fitting that the new building of Wilkes College should be named after Admiral Stark, who has rendered such signal services to his own country and the Free World.” Churchill’s support for the construction of Stark Hall at Wilkes College reveals his profound respect for the admiral as well as the positive attention that Stark brought to Wilkes College with his international connections.

Harold Stark remained an active naval advisor in Washington D.C. during his retirement until his death on August 20th, 1972 at the age of 91. He was buried in the Arlington National Cemetery in Virginia. Prior to his death, Stark donated his military papers and ephemera to the newly constructed Eugene S. Farley library in 1968. The library created a collection room filled with Stark’s papers, portrait, desk, flags, photographs, and other ephemera to honor his military service and board of trustees service to Wilkes College. Many of these materials are digitized now for public research. Furthermore, Stark’s legacy at Wilkes can be seen daily with busy lectures, classrooms, and laboratories within the Stark Learning Center, within Chase Hall, and many other buildings that he helped improve during his time as Chairman.

One thought on “From Admiral to Chairman: A Review of the Admiral Harold R. Stark Collection, 1923-1972”